It’s official. Most people are more likely to wind up six feet under because of almost anything else under the sun other than COVID-19.

The CDC just came out with a report that should be earth-shattering to the narrative of the political class, yet it will go into the thick pile of vital data and information about the virus that is not getting out to the public. [1]

For the first time, the CDC has attempted to offer a real estimate of the overall death rate for COVID-19, and under its most likely scenario, the number is 0.26%. Officials estimate a 0.4% fatality rate among those who are symptomatic and project a 35% rate of asymptomatic cases among those infected, which drops the overall infection fatality rate (IFR) to just 0.26% — almost exactly where Stanford researchers pegged it a month ago. 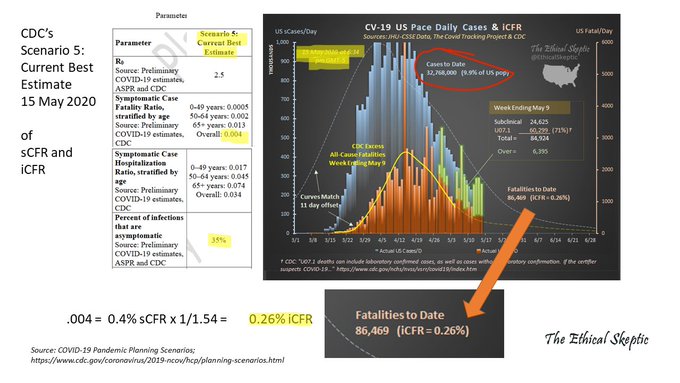 Until now, we have been ridiculed for thinking the death rate was that low, as opposed to the 3.4% estimate of the World Health Organization, which helped drive the panic and the lockdowns. Now the CDC is agreeing to the lower rate in plain ink.

Plus, ultimately we might find out that the IFR is even lower because numerous studies and hard counts of confined populations have shown a much higher percentage of asymptomatic cases. Simply adjusting for a 50% asymptomatic rate would drop their fatality rate to 0.2% – exactly the rate of fatality Dr. John Ionnidis of Stanford University projected.

More importantly, as I mentioned before, the overall death rate is meaningless because the numbers are so lopsided. Given that at least half of the deaths were in nursing homes, a back-of-the-envelope estimate would show that the infection fatality rate for non-nursing home residents would only be 0.1% or 1 in 1,000. And that includes people of all ages and all health statuses outside of nursing homes. Since nearly all of the deaths are those with comorbidities.

The CDC estimates the death rate from COVID-19 for those under 50 is 1 in 5,000 for those with symptoms, which would be 1 in 6,725 overall, but again, almost all those who die have specific comorbidities or underlying conditions. Those without them are more likely to die in a car accident. And schoolchildren, whose lives, mental health, and education we are destroying, are more likely to get struck by lightning.

To put this in perspective, one Twitter commentator juxtaposed the age-separated infection fatality rates in Spain to the average yearly probability of dying of anything for the same age groups, based on data from the Social Security Administration. He used Spain because we don’t have a detailed infection fatality rate estimate for each age group from any survey in the U.S. However, we know that Spain fared worse than almost every other country. This data is actually working with a top-line IFR of 1%, roughly four times what the CDC estimates for the U.S., so if anything, the corresponding numbers for the U.S. will be lower.

Brief History of Disease – How We Conquered Infectious Disease

Medicine can be broadly categorized into two distinct groups; trauma and health. Western medicine is a product of wartime innovation designed to get soldiers back on the field as soon as possible. When it comes to trauma medicine, Western medicine is the undisputed...

END_OF_DOCUMENT_TOKEN_TO_BE_REPLACED

Sleight of Hand Safe and Effective™ is the mantra we're all familiar with. When we're told a medical product is effective there is an automatic assumption that it has been scientifically proven to treat or prevent what it was designed for. It's this assumption that...

END_OF_DOCUMENT_TOKEN_TO_BE_REPLACED

“My Doctor Knows Best.” – How much does he really know?

Doctors are supposed to be our most trusted source of information concerning the health of ourselves and our children. We trust that when they recommend a medical intervention that they fully understand the risks, the benefits, and the alternatives. We trust that...

END_OF_DOCUMENT_TOKEN_TO_BE_REPLACED

BRASILIA (Reuters) - Brazilian health authority Anvisa said on Wednesday that a volunteer in a clinical trial of the COVID-19 vaccine developed by AstraZeneca and Oxford University has died, stating it had received data from an investigation into the matter. The...

END_OF_DOCUMENT_TOKEN_TO_BE_REPLACED

Back in April, when the coronavirus was still new and scary, with cities from New York, to London to Paris in its grip, the professional commentariat was abuzz with speculation about what our not-too-distant post-COVID-19 future might look like. At one point, the...

END_OF_DOCUMENT_TOKEN_TO_BE_REPLACED

Authored by Craig Pirrong via The American Institute for Economic Research, It’s more than fair to say that we are experiencing a pandemic, but not the one you hear about ad nauseum. No, the pandemic is not a virus, it is a pandemic outbreak of Munchausen’s...

END_OF_DOCUMENT_TOKEN_TO_BE_REPLACED

In September, Brazil's wealthiest and most populous state Sao Paulo went into contract with Chinese vaccine developer Sinovac Biotech, with the expectations to receive 46 million doses of CoronaVac. CoronaVac has been in Phase 3 testing in the South American...

END_OF_DOCUMENT_TOKEN_TO_BE_REPLACED

We exist to counter the massive disinformation campaign regarding the pandemic. We are diverse, exceedingly well-credentialed physicians with extensive front line experience treating COVID-19 and the risky health effects due to the lockdowns. There are many early...

END_OF_DOCUMENT_TOKEN_TO_BE_REPLACED

From Zerohedge.com Social media companies and mainstream media outlets are on a crusade, censoring anyone who challenges the "official" science and narrative behind the COVID-19 virus. It was only last week when Twitter removed New York Post's bombshell stories...

END_OF_DOCUMENT_TOKEN_TO_BE_REPLACED

As our previous article How We Conquered Influenza After a Century of Failure discussed, nations are suddenly for the first time in history winning the war against Influenza. Today we're covering Australia which has had the most remarkable success of anywhere on...

END_OF_DOCUMENT_TOKEN_TO_BE_REPLACED

In the interest of "transparency", Pfizer CEO Dr. Albert Bourlas released a statement on Friday outlining the timeline for when its experimental COVID-19 vaccine might be ready for approval for regular, non-emergency use. Much to Trump's chagrin, CEO Dr. Albert...